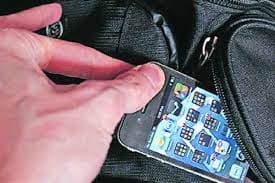 Vasudha Patki, who lives in Dombivali, is the headmistress of a school in Kalyan East. On Monday morning, she went to Kalyan from Dombivli railway station to go to school. While alighting from the Kalyan railway station, he noticed a mobile phone in his wallet missing. In the local, the purse was stuck in the hand, so some of it was on the back. At that time, the thief, keeping an eye on the thief, lost sight of the headmistress Patki and took away her mobile phone.

All the ordinances of the education department, school information, student activities, teacher contact numbers were in the mobile. The headmistress Patki contacted her son Bhushan Patki and informed him about the incident. After attending school, headmistress Vasudha Patki has decided to go to Kalyan Lohmarg police station and lodge a complaint.