The number of leaders leaving the NCP is not small. On the contrary, it is increasing day by day. But, an activist will never lose his loyalty to the party. He has written in the bond paper of one hundred rupees that he will remain in NCP till his last breath. Dadarao Ashok Kamble is the name of this young activist. Babasaheb Ambedkar is a research student at Marathwada University. Sharad Pawar was also overwhelmed for some time due to the bond paper given by a student.

After the Lok Sabha elections, the NCP split. One after the other, there was a line of leaders going out. The spill, which started from Balekilla in western Maharashtra, is shaking the NCP in Konkan, Mumbai, Marathwada and North Maharashtra. One such activist has written his allegiance to the NCP on bond paper.

Sharad Pawar was on a tour of Marathwada last week. From Osmanabad to Aurangabad, he attended various workers’ rallies. On Friday (September 20) a workers’ meeting was held in Aurangabad in the presence of Sharad Pawar. After that he stayed in Aurangabad. Hundreds of student activists had gathered at the hotel to meet him, but many were unable to do so due to security concerns.

Dr. Dadarao Jagannath Kamble A student doing his PhD at Babasaheb Ambedkar Marathwada University has decided not to leave the NCP in his vertical life. Not only that, he made the affidavit on stamp paper. He has also notarized this affidavit. pic.twitter.com/WlGbXaNUE9

But, Dr. Research students from Babasaheb Ambedkar Marathwada University insisted on meeting Sharad Pawar. Local NCP leader Dr. Ulhas Udhan met Pawar and told him the feelings of the students. After that Pawar met these students. One of the students was Dadarao Jagannath Kamble! Dadarao wrote an affidavit to Pawar on a bond of one hundred rupees. When Sharad Pawar read the affidavit, he put his hand on the back of these students and praised them. 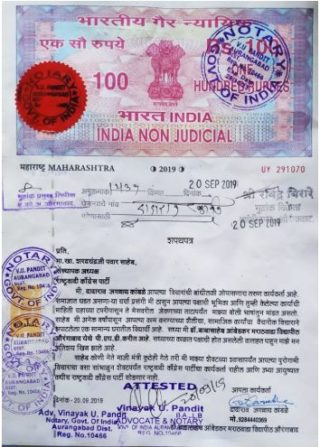 “I am a research student and our activist, cultivating a commitment to my ideas, presenting my party’s role in my dialect in front of hundreds of students coming from the teapot to the university mess. I am a student of ordinary home, overwhelmed by your social and ideological thinking. I am saddened to see the wind blowing in the party these days. “No matter where any leader or minister has gone, I will continue to work as a NCP worker till my last breath, carrying the fat of my progressive thoughts and will never leave the party in my vertical life,” he said in his affidavit.

Democracy is now on the telegram. Our channel (OkLoksatta) To join Click here And get the latest and important news.

"BJP is the biggest party in the world, but no loyalists were found against me"