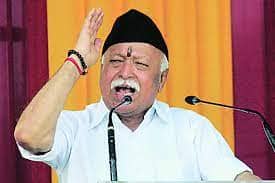 Appeal to traditional farming with modernity
Sixty-five per cent of farmers in India, who own a small portion of the land, commit suicide by going into debt due to the temptation of mechanical farming. Performed by Mohan Bhagwat. If small scale agriculture is to be developed in India, farmers should be taught the traditional way of farming along with modernity, he said. Bhagwat said.

He was speaking at the 12th convocation of the National Institute of Veterinary Sciences and Maharashtra University of Animal and Fisheries Sciences on Monday. At this time, Dr. Mohan Bhagwat was awarded an honorary scholarship by the National Institute of Veterinary Sciences, New Delhi.
Dr. Bhagwat said research on agriculture and animal husbandry is in English, making it difficult for farmers to understand. With the emphasis on regional languages ​​in the new education policy, farmers will no longer benefit if these materials are made available in regional languages. India’s national gross domestic product (GDP) can be increased on the basis of agriculture and animal husbandry.