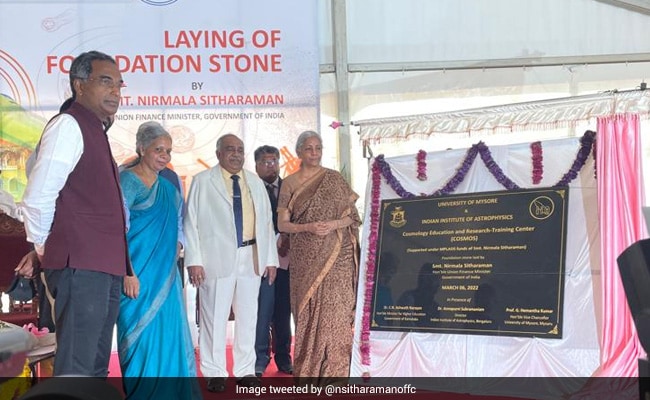 Union Finance Minister Nirmala Sitharaman on Sunday said ‘Cosmos’, coming up on the Mysuru University campus would be more than just a planetarium to gaze at the sky on a real time basis as it will offer data which can be used by young scientists for “future learning”.

After laying the foundation stone for state-of-the-art planetarium, ‘Cosmos’, Mr Sitharaman said, “It’s not just a planetarium for which all of your have gathered. A planetarium, yes, but it is more than a planetarium. It is going to give you all the data that you can use.”

Coming up at an estimated cost of Rs 81 crore from Ms Sitharaman’s MP Local Area Development (MPLAD) fund, the project is expected to be ready by March 2023.

Speaking on the idea behind setting up a planetarium on the sprawling campus of the University of Mysore, the Finance Minister, who is a Rajya Sabha member from Karnataka, said she always wanted to recreate a ‘beautiful, undisturbed and no glare Leh sky’ in Mysuru.

Dwelling on the need to have a planetarium in Mysuru, she pointed out that today everyone uses a fancy cliche that data is the new oil.

Data may be the new oil, but it cannot be of any use if one does not know how to use it, Ms Sitharaman told the gathering.

She added that the country needs a centre where real time data, which is related to astrophysics is available to students and researchers.

According to her, she wanted a centre of astrophysics where not only the current data, but also past data is available to students where they can use it in a guided way with proper teachers, faculties and scientists.

“And once, just once, when you see the outcome, it’s a fantastic feeling. It’s a moment of Eureka for you. You can say, ‘Wow! Is this what is before me?’ And once you get the taste of that, you’re building yourself in the right inquisitive way to be a great scientist,” the finance minister said.

Ms Sitharaman also said she wanted India to have a lot many young scientists to have that advantage to grow to become a scientist who can use the data in such a way that it can benefit individuals, state, country and the humanity.

On the selection of Mysuru to realise her dream project of a planetarium, she said the city has always stood for good learning ecosystems.

“I’ve always felt Mysuru was a place (to set up Cosmos). Look at the number of writers, look into the number of artists, look at the creative geniuses who lived in Mysuru. It’s a little planet to itself where learning become so charismatic. Learning is charismatic because the way it has been cultivated in Mysuru,” Mr Sitharaman explained.

She also said Mysuru is affordable unlike some “Ivory League places where learning happens but you can’t afford it.”

Quoting Principal Scientific Advisor in the Government of India Professor K Vijay Raghavan, who was present on the occasion, she said, “Prof Raghavan uses this word — democratise learning, make it available for everybody and make it available in such ways in which each person can utilise it, Learn from it and rejoice from it because ‘jnana‘ (knowledge) is always something which gives you happiness.”

Asking the students to rejoice in learning and not look only for luxury, she said many poets and writers lived in abject poverty but, they lived in joy because they learnt a lot in their lives.