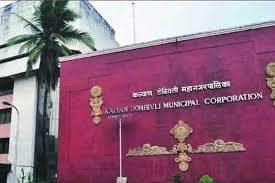 Kalyan: The online computer system of Kalyan Dombivali Municipality, which has been categorized by spending crores of rupees, has come to a standstill. Citizens are expressing their displeasure as property tax payment, receipt of payment, new water connection, new tax levy, transfer of property are not being done online. Citizens are complaining that they are not getting answers from the officials and employees even after contacting the municipality directly or on mobile.

Citizens are asking what exactly the officials of Smart City Company have done in the last two months by upgrading the municipal computerization. Property tax, water bills are distributed by the municipality to the customers. Citizens get a five per cent rebate from the general tax if they make a single payment. Citizens use the municipality’s online system to pay property bills. Citizens are disturbed as the system does not respond. Many citizens have applied online for new water connections. Citizens do not even know the status of their applications. Asset transfer cases are mired in technical confusion online.

Some citizens have paid property taxes. They did not receive an online tax receipt. As the online system is down, many citizens go to the civic amenity center of the municipality and complain about the system being down. Employees do not actually take any action other than listening to complaints, citizens said.

E-governance system was started 22 years ago in Kalyan Dombivali Municipality. Due to the rapid change of information technology, the computer system in the municipality became obsolete. Therefore, in order to provide state-of-the-art facilities to the citizens, the municipality decided to upgrade the computerization system. About Rs 34 crore was spent for this work. Despite providing state-of-the-art facilities, Smart City officials, including computer department officials, have been harassed by a flaw in the online system. Computer upgrade deployment, server capacity enhancement, technical upgrading works were earlier done by the officials of the computer department of the municipality. As the employees of the corporation have experience in customer oriented service, they had earlier upgraded computerization at a cost of Rs 5 crore with proper planning. But there have been some technical glitches in the upgrades made through the Smart City company. Citizens are suffering from it, a municipal official said privately. As the upgrade work has been done by the smart city officials, the officials and employees of the computer department of the corporation are not ready to interfere in this work. Citizens are getting involved in this controversy.

‘There are flaws in the categorized online system. They are being repaired. As the system is new, suggestions from customers regarding errors are made. Improvements are being made in this regard. This system will be launched at full capacity soon, ‘said Prashant Bhagat, Head, Department of Smart City Information Technology.

Staff are being trained on how to handle the new system. Property tax receipts are being handed out manually, said Pallavi Bhagwat, head of the computer department.