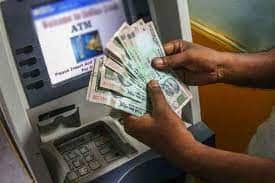 Kalyan: Thieves broke into an ATM of a bank in Mhasoba Chowk area of ​​Kalyan East and stole cash amounting to Rs 27 lakh. The incident of theft has been captured in the CCTV in the ATM. Police are searching for the accused on the basis of CCTV footage. There is a Bank of India ATM in Mhasoba Chowk area. There are CCTV cameras outside and inside the ATM. At around 3 to 4 am on Sunday, they broke into the ATM with two sharp objects, a chisel, a hammer and broke into the ATM and stole Rs 27 lakh in cash.

When a customer came to withdraw money in the morning, he noticed the type of theft. He informed the bank. A case has been registered against two strangers at the Kolsevadi police station.

Last month, police arrested a Nepali man for burglary at an ATM in Kalyan East at night. The bank’s control room received information that a person was making suspicious movements at an ATM in Kalyan East. The control room staff immediately informed the coal mining police. Police broke into the ATM and arrested a man. A man from Nepal had come to Kalyan for work. The police investigation had revealed that he was stealing due to lack of employment.

Thane: Worker dies after falling from building during construction