A meeting of all party leaders was held with Chief Minister Devendra Fadnavis to discuss the ongoing Maratha agitation in the state. In this, various important issues related to Maratha reservation were discussed.

A meeting of all party leaders was held with the Chief Minister in Mumbai on Saturday regarding Maratha reservation. In this meeting, it was decided to call a special session on reservation, explained Chief Minister Devendra Fadnavis in a joint press conference.

A meeting of all party leaders was held with Chief Minister Devendra Fadnavis to discuss the ongoing Maratha agitation in the state. In this, various important issues related to Maratha reservation were discussed. In this, a demand was made to the State Backward Classes Commission to come up with a solution for giving reservation to the Maratha community on the lines of Tamil Nadu. It was also requested that the Commission should submit a report in this regard to the Government at the earliest, after which a special session should be convened immediately to settle the statutory matters.

I have instructed the DGP that cases registered against people, participating in protests, should be taken back. Only the serious cases like attacking police personnel, indulging in arsoning etc will not be taken back: Maharashtra CM Devendra Fadnavis #MarathaQuotaStir pic.twitter.com/zRh0szzexA

At the same time, during the bandh called during the Maratha agitation in the state, violent incidents had taken place. This includes attacks on police. Also, CCTV footage showed some of them blowing up police vehicles and damaging public property. Action will be taken against those involved in such acts. However, the Chief Minister clarified that if any crime has been registered against the youth, the concerned police officers have been ordered to withdraw it.

Appealed that the situation should be peaceful & no one should take the extreme step. Requested Backward commission to submit its report & then we’ll convene a special assembly session: Maharashtra CM Devendra Fadnavis after conducting all-party meeting over #MarathaReservation issue pic.twitter.com/blOGRXHJDM

The Chief Minister said that the protesters should try to maintain peace in the state and no one should take extreme measures like violence or suicide. It has been unanimously decided that the Opposition will also cooperate with the state government to take immediate action on the issue of reservation for the Maratha community. 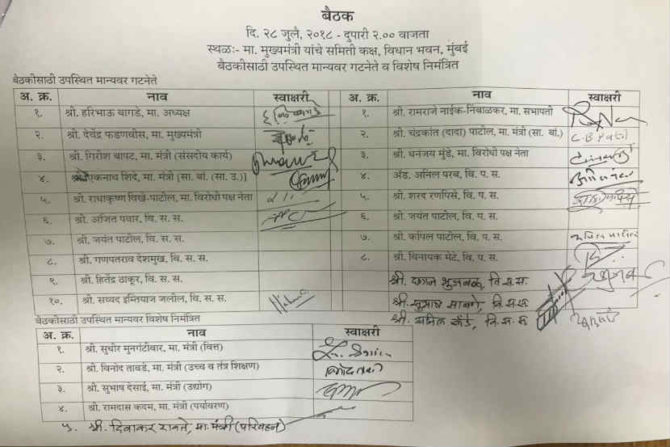 Democracy is now on the telegram. Our channel (OkLoksatta) To join Click here And get the latest and important news.