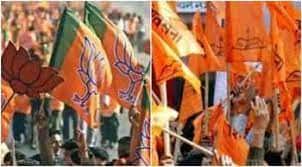 Dombivali: Considering the upcoming Kalyan Dombivali Municipal Corporation elections, inconvenient multi-member ward structure, difficulties in getting elected, eight to nine BJP corporators joined Shiv Sena in the last two to three months in the presence of Environment Minister Aditya Thackeray and Guardian Minister Eknath Shinde. Gayaram, who is in high spirits as the stable party enters the victory phase, has been hit hard by Tuesday’s mutiny in the Mahavikas front.

The elections to be held in the next three months of Kalyan Dombivali Municipality will be held on multi-member ward system. The geographical structure of the multi-member ward system for the elections has been adapted by the Shiv Sena leaders as per their convenience. BJP’s Kalyan district president Shashikant Kamble has criticized Shiv Sena wards from time to time. BJP’s office bearers in Dombivali, Kalyan have lodged complaints with the Municipal Election Officer, State Election Commission regarding this faulty ward formation.

As there is a multi-member ward structure for the convenience of Shiv Sena candidates, it is not possible to get elected without the support of Shiv Sena in the formation of new wards. Hundreds of activists joined Shiv Sena at the Guardian Minister’s bungalow.

Now with the blessings of Shiv Sena, you will get candidature in the municipal elections. There was Gayaram Mandali who joined Shiv Sena to get elected as the ward was safe. Many aspiring candidates have also started campaigning. Guardian Minister Eknath Shinde’s mobile phone was switched off on Tuesday morning. He will not attend the Shiv Sena meeting. Such news started coming in contact with Shinde BJP. And the Gayaram Mandals who joined the Shiv Sena from the BJP were overwhelmed.

These churches are worried about what will happen to us now. BJP’s budding candidates in the new ward formation ward are also working hard to get candidature in the elections. What if a new BJP-Shiv Sena government is formed in the state due to Shinde’s rebellion? Earlier, most of the corporators who were with BJP local MLA Ravindra Chavan have left BJP and joined Shiv Sena. His anger is against local BJP office bearers and MLAs. There is a latent fear among the Gayaram corporators and activists that it will be difficult for you to get the candidature if the rage comes out during the municipal elections.

Shinde, who is trying to jump into the Shiv Sena after seeing his wife, son and daughter-in-law and whether he gets a candidature from the BJP, has become wary of Shinde’s rebellion. In the run-up to the municipal elections, there is a possibility of a revolt against the local aspirants against the Gayaram corporators.

When contacted by some Shiv Sena corporators, they said in private, ‘Now we have jumped on the bandwagon. Our master has made a big mess. It would have been better if he had stayed in BJP. Now BJP’s Ravindra Chavan and Guardian Minister Eknath Shinde from the same party will have to go for candidature. Our future is in their hands, ‘said Gayaram corporator, an aspiring candidate.

Streams of sweat in the AC locale; Passenger harassment due to poor air conditioning